Keanu Reeves seems to always play in movies that have him fighting with ninja-like abilities. If you have seen any of the John Wick movies, his skill as an assassin only seems to have improved over time.

John Wick is one of the best and most ruthless assassins in the world, and he does it all with absolute class. This also means his clothes are totally on point, and his watch too.

An assassin of John Wick’s caliber would not be seen dead (or alive) wearing a Seiko or a Swatch. John requires an absolute class in a watch.

So, perhaps it’s no surprise to you watch lovers out there what Keanu is wearing….

An elegant and almost timeless style watch, the Manero AutoDate from Carls F. Bucherer is a watch that suits the classy violence of a man like John Wick.

When you see the watch (not very often actually) in the movie, he is wearing it on the inside of his wrist. To help protect it from getting damaged is my guess. Although the watch does feature a scratch-resistant sapphire crystal (with anti-reflective coating), it can still get damaged by a man like John. And he is still wearing it in the latest trilogy, John Wick 3 (aka Parabellum).

Of course, this watch is over a thousand dollars, so perhaps you are looking for something a little cheaper?
I have found some cheaper alternatives that are very similar, you can see them all below… 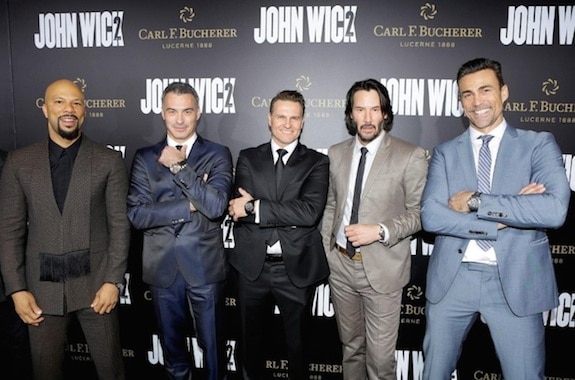 Carls F. Bucherer has also heavily invested in sponsoring the John Wick 2 movie and was present at the premiere giving the cast a range of their watches to wear.

Carls F. Bucherer continues to supply watches for the newest version of the movie franchise, John Wick 3. John is wearing the Manero AutoDate as usual, but what about Halle Berry? 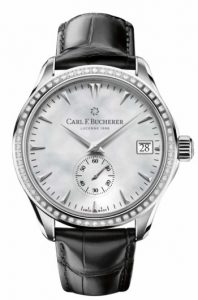 What watch is Halle Berry wearing?

Halle Berry is wearing something a little more elegant – the Manero Peripheral. It features 60 diamonds on the bezel along with a 40mm stainless steel case, an in-house automatic CFB A2050 movement along with a small seconds subdial, and a date window on a dial with mother-of-pearl inlay.