Orient is a Japanese watchmaker that introduced us to a diving watch that took the market by storm nearly 15 years ago.

The original Mako was an affordable diving watch loved both by passionate divers and watch collectors. But it did have some irrefutable flaws – accuracy issues, no hacking movement, and a really weird date change button.

More than a decade later, Orient finally granted our wishes and came out with the Mako II – a similar watch to the original, but with an upgraded movement.

But is that really enough? Is it just sugar-coating the reality that you can’t have everything for such a low price? Or is the upgraded movement exactly what the Mako II needed to win our hearts and become a staple on our wrists? Let’s find out! 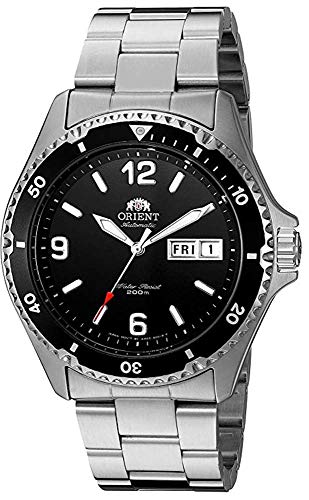 There is not a lot of differences between the two – the USA version uses a sapphire crystal, as opposed to the mineral crystal on the plain Mako II watch. But more on that later.

For now, you can check out the basic specs of this Orient diving watch:

The dial of the Mako II is everything you’d expect it to be. It features applied markings that are lined in thin metal, and are filled with lume. Which performs really well, considering the price point.

The thin metal edges that we see on the markers is also present in the day and date window, which is at the 3 o’clock position. As a result, there are only three Arabic numerals on this dial. There is also a raised chapter ring on the outer perimeter of the dial, which marks the minute and passing of the seconds.

What about the hands? The hour and minute hands have a sword-style design, while the seconds hand has a spear-shape, with a red tip. The tip of the seconds hand clearly “pops” against the blue and black backgrounds of the dial. And on Sundays, you’ll also find that it matches the day window!

The mineral crystal glass that covers the dials is quite prone to scratches, as you’re probably aware. But even if you do scratch it, it’s nothing a deep, albeit expensive, polish job can’t get out. And it’s worth it, to preserve that gorgeous sunburst sheen on the face of the dial that makes the marking easily legible even in direct sunlight.

The sunburst dial also helps make Orient’s applied logo on the dial clearly visible even in the brightest conditions. And there is also the water-resistant marking so that you never forget just how deep you can dive with the Mako II. More details about its water resistance later.

The case of this Orient watch is sleek and looks stylish for a dive watch oo. It is 41.5mm wide and only 13mm thick, with the lug-to-lug measurement coming in at 47mm. It’s a classic size that fits most people really well and that just looks good on your wrist.

The bracelet of the Mako II features a combination of brushed and polished elements. The sides of the links are polished and the tops are brushed, giving them a matte look. The same goes for the case – the top of it is matte brushed while the sides are high polished. And even though the finishes are different, the transition between them is seamless.

What’s even better is that the case and the bracelet go together perfectly. I bet you’ve had a watch where you felt like the bracelet just didn’t fit the case like they were pieced together from separate watches. That’s definitely not the case here (pun intended) – everything fits together well, and overall, it looks very classy.

The only area where the Mako II disappoints a little are the end-links – they are hollow, so you can expect some rattling noise. But it’s not the end of the world – and it does mean that the watch is somewhat lighter, which is ultimately better for diving and daily comfort.

The case has a screw-down crown that can adjust almost anything on the watch. You use it to change the time and date, to hack the movement, and to manually wind the watch. It’s pretty handy, but it’s up to you to decide whether or not it is an improvement from the original Mako’s crown. Or whether it just makes the original watch more unique, and a must-have in a collector’s drawer.

Both the crown and the back of the case have Orient’s signature logo, which is a nice detail. And there is also a logo on the double push-button safety clasp, which is of surprisingly high quality.

The 46943 Caliber movement included in the original Mako watch was full of flaws, at least to a watch lover like me. It lacked hacking and manual winding, and it was not very accurate. But, although that movement was first introduced with the Mako watch, it was actually Orient’s in-house technology that dates all the way back to the 70s. So, somehow, we can forgive them.

The fact that they included F6922 in the upgraded Mako II is a big deal. It allows hacking (manually stopping the second hand), which really helps you alter the current time of it with accuracy. Plus, you also have the ability to manually wind the watch, which is really helpful for people who won’t wear the Mako II on a daily basis, and don’t have a watch winder at home to keep it running. And in fact, it’s quite surprising to see such features on such an affordable watch, even watches like the Longines HydroConquest don’t have them.

Sometimes you want to switch things up, or you want to use this watch only for diving. And in those cases, when the 40-hour power reserves run out, having the option to manually wind the watch with the crown is really convenient.

What remained the same in both versions of the Mako watch are the power reserve and the number of beats – the two features that did not need to be improved in the first place.

The Mako II is a diver’s watch so it is obviously water-resistant – imagine how useless it would be otherwise!

To be precise, this Orient watch is water-resistant up to 200 meters (660 feet), which basically means you don’t ever have to worry about your watch working underwater.

In addition to that, the Mako II also features a unidirectional 120-click diver’s bezel, which greatly helps you keep track of time underwater. And since it is unidirectional, you can never accidentally bump it and add time. 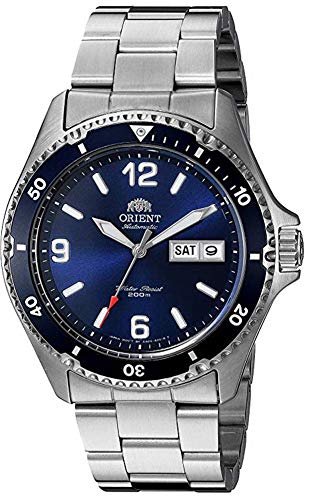 The original Mako watch was loved and worn by many. So much so that almost more than a decade later Orient caved and gave us the Mako II – keeping everything we loved about the original the same, but improving the flaws.

And successfully, if I might add. The Mako II is an affordable diving watch with automatic movement. It supports hacking, manual winding and has a unidirectional diver’s bezel that helps you keep track of time underwater.

Plus, it just looks good. Due to the relatively small size, the term “arm candy” is more than appropriate here. And it’s affordable, under $150, the price tag makes it super hard to resist clicking that buy button.

And if you are also wondering what the difference is between the Mako and the Ray, the other popular watch from Orient, you can read a detailed comparison here.