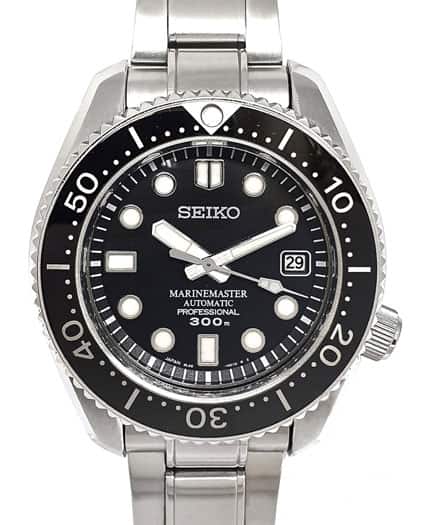 The Seiko Marinemaster 300 SBDX001 is a very rare watch that is a continuation of the lineage of real divers watches that Seiko began back in 1965. They first started with a 150m rated watch, but it did not take them long to double that to the 300m true diver rated watch we all know and love. This particular watch was released nearly 20 years ago but still hails as a classic today.

If you look at the watch without studying it in detail, you could mistake it in many ways for the cheaper and more common SKX range. But it is anything but.

The SBDX001 is built to last with its monobloc case, which has a flat back and no screw at all. It is super chunky at 15.7mm and only be accessed via the front. A smart design decision for a watch designed to be taken a little deeper than most divers do at 30m. Other than the rather oversized look of the case, it has brushed lugs that complement that otherwise polished look of the case and strap.

The dial is typical Seiko diver all around with large round pips, lavishly coated in Lumibrite, so easy to see in the dark. There is a simple date window at 3 o’clock, and the Marinemaster Professional 300m inscription at 6 o’clock. The crown is offset at 4 o’clock, which is not unusual for a diver, offering some sort of protection. However, it is disappointing to see no crown guard on a watch of this caliber!

And speaking of caliber, the movement is a quality piece – the 8L35 with 50 hours of power reserve, with a smooth 28,800 beats and a high jewel count of 26. But otherwise, no remarkable complications to note.

Of course, because this watch is so rare, you might be interested in some of the other similar models that are in the Marine Master 300 range.