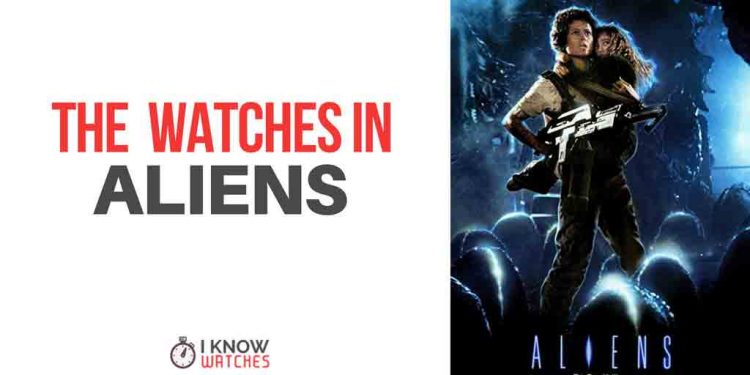 The Watches Seen On Aliens From Seiko

The movie Aliens might have been on the big screen decades ago, but with the franchise still alive and kicking, it is still fresh in our minds.

The original Aliens set the scene for the success of all the movies and many of the stars as well. But what was really awesome to see in Aliens was that each of the main characters, and some others as well, all wore unique Seiko watches.

These watches have become highly sought after in the vintage watch world, and for good reason. They are designs that stand out from the crowd and have almost never been seen before or since. Perhaps because they were so “sci-fi” in their look?

In this post I am going to show you which exact watch each of the characters wore, and where you can find them. 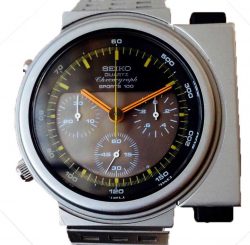 Around the time Aliens was being filmed Seiko were producing their now famous 7A28 Quartz Chronographs. This was Seiko’s way of showing the Swiss watch makers how good a mechanical quartz watch could really be.

Seiko produced the watches specifically for Aliens and even enlisted the help of an Italian car designer – Giorgetto Giugiaroto. As you can see with this model it is a standard 7A28 chronograph, however on the right hand side is a futurist panel with the standard chronograph (start/stop/reset) buttons now enlarged and placed vertically. 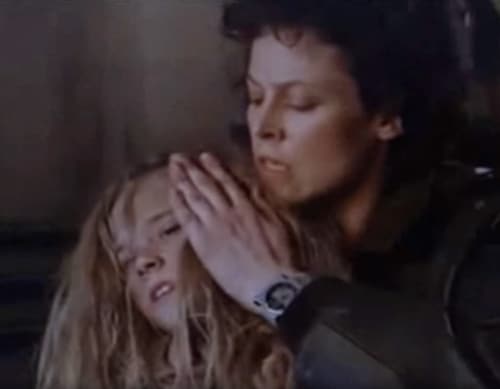 Given that Aliens was set in the distant future where humans are exploring the furthest reaches of space, it makes sense to create such watches as these, and they definitely fit the look and feel of the movie. And when you combine them with the insanely ugly aliens that H.R. Giga produced, you have a winning film! Seiko produced this watch back in 1983, however it was later re-issued with some slight design changes and a new model name -SCED035 and SCED037 (gray and black cases) If you are looking for the 7a28 7000 original you can see it here in this image. The biggest tell for me is the Seiko Quartz Chronograph at 12 o’clock. The newer version is missing the “Quartz”, and simply says “Seiko Chronograph”. Some of the older versions also say “Sports 100” at the bottom. I have not been able to determine which ones, and why. 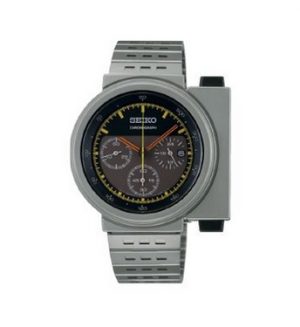 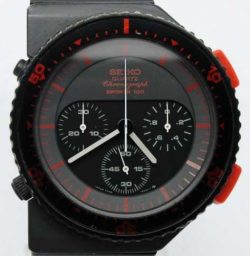 Bishop is almost as famous as Ripley in Aliens because of the knife scene. At least in my eyes. He is initially the science officer on the ship but soon takes on a key role in the movie, helping to save Ripley and the few that remain. Bishop is also surprisingly an android, which Ripley was not happy about in the beginning. Another Giugiaro styled watch is on Bishop’s arm, and it is quite hard to make it out if you want the movie. In the knife scene you catch a good glimpse of it, and a few more times in the movie.

The original watch worn by Bishop is the Seiko 7A28-6000. Also designed by Giugiaro, you can see some similarities with Ripley’s watch. This one, however, is quite unique with its offset and angled metal band and red/black design. Again, the buttons for the chronograph are oversized, but unlike the 7000 above, they are right where they should be.

As with all other 7A28 quartz chronographs of the time there are also two other buttons on the left hand side for setting the time and working with the chronograph. You will also notice the very specific text on these 7A28 models – Seiko Quartz Chronograph (sometimes again with Sports 100) which is not present on the reissue model.

The reissues came out in 2013 and this was one of the first. It is almost identical to the original except for the crown at 3 o’clock, instead of at 8 o’clock on the 6000. There is also no 4th button at 10 o’clock.

The logo at 12 o’clock is also white with a red Chronograph text below it (but no quartz, and not all in red like the 6000 original). So, if you are looking for the 7A28-6000 these are very distinct markings to look for. Just be on the lookout, as many will claim the new version as the original to get you to pay more. 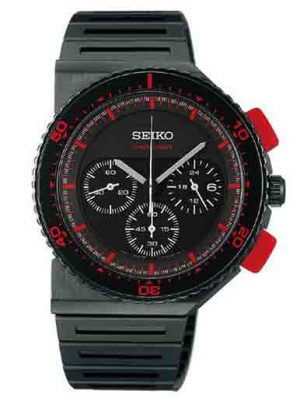 Seiko Aliens,Bishop and Ripley 7a28 and other watch Box and outer box (unused)
$25.0
SEE ON EBAY 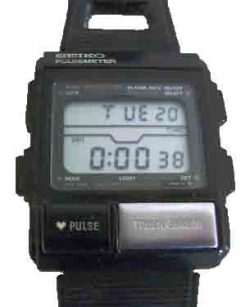 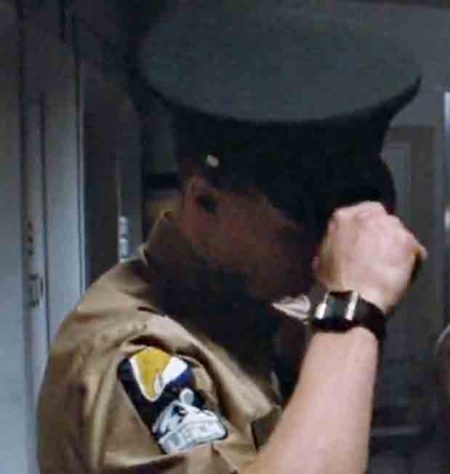 The Seiko Pulsemeter (S234-501A) was worn by a number of the marines in Aliens. You can see it when they come to first convince Ripley early on in the movie, as well as when Hudson asks Bishop to do the knife trick at the breakfast table.

This is another of the watches that is not part of the Giugiaro series, but has some very unique features. First, it came complete with a chest strap that could actually measure your pulse. Simple to do today with a Fitbit or a Polar watch, but back in the 80s this was not so common. 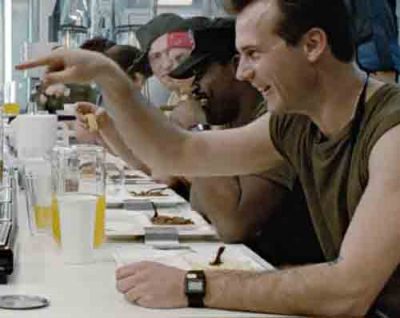 Otherwise, this is a quite simple digital watch very reminiscent of a Casio. Four black buttons on the sides to set the time, use the functions like the alarm etc. Then there are two buttons below the screen for the pulse measurement. The left one is black (labelled pulse with a heart in white) and the right one is silver with “touch sensor” embedded writing.

If you are looking for a genuine one of these be aware of a number of things. Firstly, it is the Seiko Pulsemeter S234-501A that is the correct model. Secondly, a lot of people take similar models and paint the buttons black – because in other models the left hand one can be other colors like yellow. 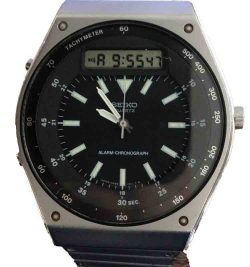 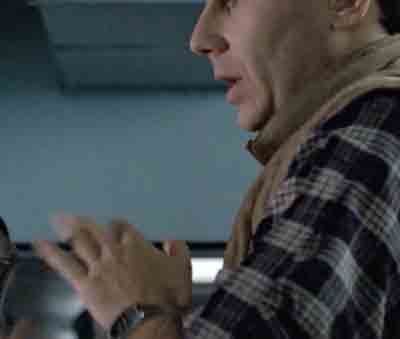 Burke does not play the biggest role in the Aliens movie, but his watch is still a highly sought-after piece. It is quite different to the other two Giugiaro designed watches above, but still unique enough to warrant the attention.

The first thing you will notice is that the H556-5050 is a combination analog / digital watch with a slim digital display at the top of the watch. It is more something you would expect to see from the likes of Casio, but in this case it is not.

I love the addition of the studs on the four corners, especially since you rarely see any such “connectors” on watch bezels or cases. 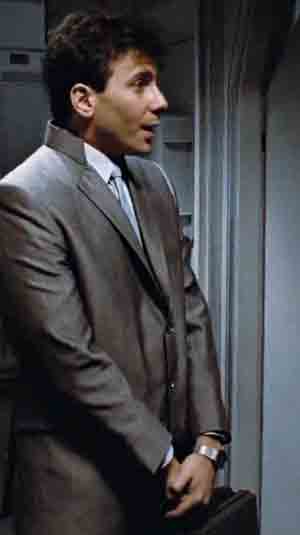 The dial features an inner ring of 24 hour markers (from 13 – 24hr). This is followed by a seconds marker ring which is used by the chronograph. This is controlled on the left hand side of the watch, another anomaly in this model.

The outer right on the bezel area is a tachymetre, which if you are not familiar with it helps measure such things as speed.

The band, which is hard to see in this image is a slim, single link stainless steel version you would expect to see in the 80s.

If you are looking to grab one of these watches things are going to get tough. They are rarely seen on the auction sites and there are no re-issues like the 7A28s above, so even more people want them!

1 thought on “The Watches from Aliens – Seiko Legends”