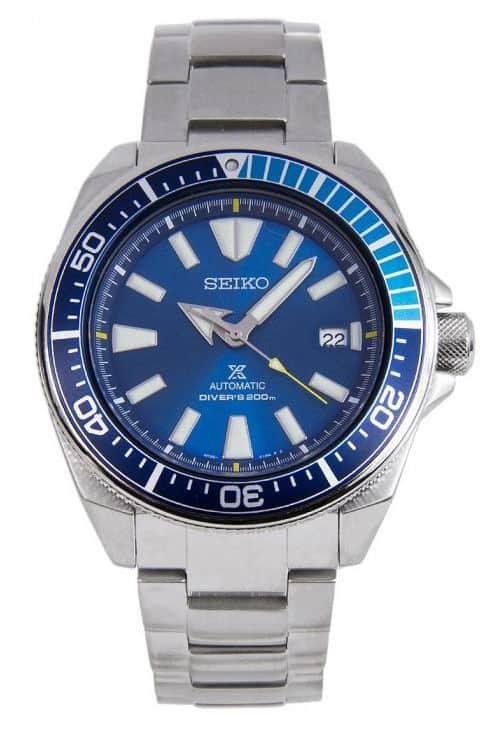 Like many of Seiko’s limited editions, the most notable change on this model is the color scheme. It is certainly eye-catching and unique and begins with the dial. It has a matte-like blue finish that also has a starburst element to it when held up in the right light. If you compare it to the regular Samurai, it is far more stunning and does not have that waffle-like pattern.

This is further complemented by the two tones of blue used on the bezel. The lighter blue is used on the first quarter of the bezel, until 15 minutes. With the standard minute markers for a dive watch. Then it moves into a darker blue for the rest, with smaller markers and Arabic numerals every 10 minutes.

The date window at 3 o’clock is unobtrusive and sits quietly next to a partial hour marker. There are further unique yellow accents on the tip of the slender second hand as well as on the chapter ring, every 15 minutes

As a very reliable Seiko diver, the Blue Lagoon Samurai SRPB09 is rated to 200m water resistance but is meant to be taken diving. That means it is ISO rated and has the relevant components like a screw-down crown and caseback. In fact, I appreciate that Seiko has made this a true diving watch with crown guards and a usable crown with knurling to make it easy to grip and change.

Speaking of which, you can use that to set the time – which is hackable on this watch. It also has manual winding, which is great if you wake up with an empty watch one day and just need to get moving!

All in all, this limited edition model is very reminiscent of the Save the Ocean I reviewed a while back, albeit with a few unique touches.

You can typically find these inexpensively on Ebay most times of the year, which is a far cry from some of the other limited editions I have seen from Seiko which cost thousands!