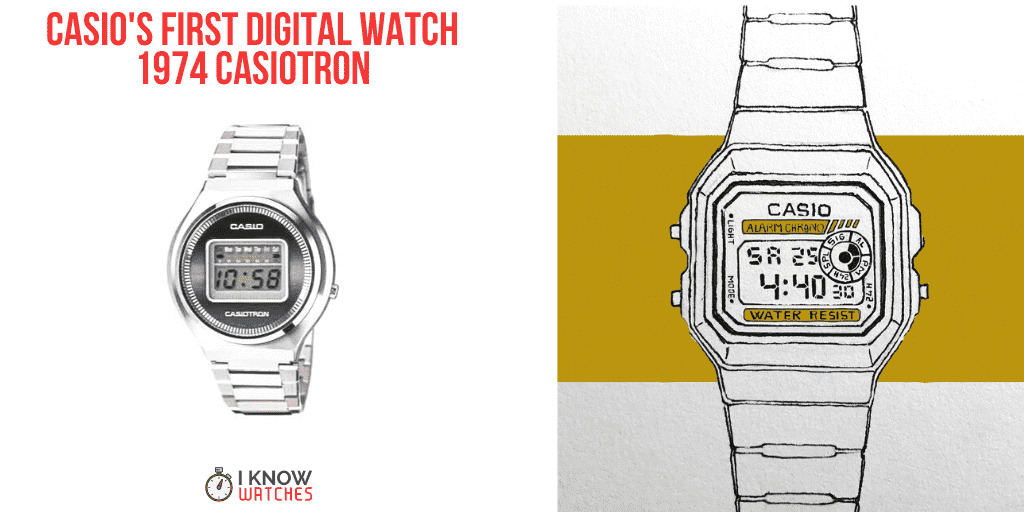 Before the Apple Watch’s not so humble beginnings in 2015, the Casio watch brand introduced features that would become the harbinger for bringing technology to the wrist. Today. the iconic Japanese digital watch manufacturer has hundreds and hundreds of digital watches on the market.

The range is so massive, the company must use a string of letters and digits as model numbers rather than names. All of these digital watches and their features can be traced back to one watch, Casio’s very first digital watch, the Casiotron, now an icon itself and a collector’s item. But was it the first? Read on for a lesson in technology history.

It was their success in the manufacturing of calculators that would make the family-owned Casio business become a household name worldwide. They were one of the five major brands that won the “calculator wars” of the 1970s. Along with Texas Instruments, Sharp, Canon, and Hewitt-Packard, Casio reduced the calculator from a bulky and costly desktop machine to a compact battery-powered pocket calculator. This success fueled their desire to focus on electrical products and the growing computer market. They even developed and produced a wrist calculator.

By 1974, the company became the pioneer of mass-producing electronic quartz watches. These watches were the first successful electronic watches and combined technology with fashion for timepieces that became revolutionary for watch wearers. The innovative and trendy watches were called Casiotrons, and they sold like hotcakes around the world. 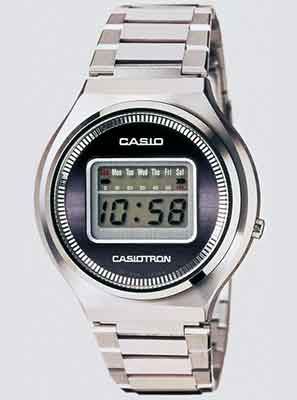 Launched in October of 1974, the Casiotron had a tiny computerized Liquid Crystal Display screen that showed the hours, minutes, seconds, and date. And it also had a quite unique function at the time,  that could automatically determine the number of days in a month. This watch was considered ground-breaking when it was released.

Some unique design features on the original Casiotron (because there were so many) is that it had no “Liquid Crystal” lettering on the dial (later models did) And the caseback of the watch also had a triangular engraving that was meant to resemble the Casio headquarters at the time, the Sumitomo building in Shinjuku.

It was Casio’s expertise in developing the battery-operated handheld calculator that gave the brand an edge in the digital watch world. The crystal oscillators in digital watches create electronic pulses to keep steady time, a technology similar to the electronic calculator which Casio had expertly mastered.

Since the watch had the ability to count the days in a month, the result was the first digital watch that had a visible calendar function. Added to that was the fact that it had an LCD display that was always on. Unlike the LED, the wearer didn’t have to press a button to see the display. This combination made the Casiotron an enormous hit across the globe. 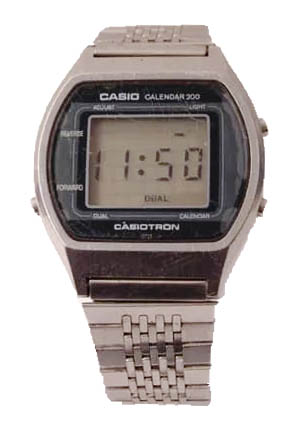 In the 1990s, Casio decided to re-release the Casiotron in various forms due to its popularity. The following are the models (all in the TRN model range) that I am aware of that were released.

Below are the best pics I could find and rework from online. There are also a huge variety of other Casiotrons around, so feel free to let me know if you have one in the comments. Maybe I can feature your picture!

As welcomed as the Casiotrons were, in all fairness, credit must be given where credit is due.

During the 1960s, Swiss, Japanese, and American watch crafters were in a race to develop a wristwatch with the application of quartz technology. It had already been used in large precision clocks. Now the quest was how to miniaturize this technology. Several companies took on lots of research, but it was Seiko who launched the first one, the Astron in December of 1969.

But on May 6, 1970, a watch like no other watch, the Hamilton Pulsar was introduced during a press conference in New York City. Powered by quartz movement, it had no moving parts and made no ticking sound. Only a few were released until the LED Pulsar P1 launched two years later in 1972. It was considered a luxury watch and was more expensive than a Rolex at that time.

It was the first mass-produced digital watch and appeared on the character James Bond’s wrist in the 1973 film Live and Let Die. American president Gerald Ford drew much criticism for wearing one when the nation was going through economic difficulties.

But while Roger Moore and Gerald Ford were sporting Pulsars, engineers were busily producing a low-powered LCD chip that would greatly extend the life of a watch battery. Before long, LCD display technology was born, and the Pulsar’s LED became “old school” tech. Microma, a subsidiary of the Intel Corporation, developed the LCD watch.

It was released two years before the Casiotron. But the watch was a failure, not because of poor design but for poor marketing. A $600,000 advertisement failed to capture the consumer market’s attention. CEO Andy Grove wore the watch to remind him to never again market directly to consumers.

Is the Casiotron Still Available?

It’s important to have confidence in the re-seller you buy from. Unfortunately, dishonest resellers use parts from a number of other watch models to craft a watch that only looks like the original. Others sell faulty ones that stop working in a matter of months. You’ll likely pay more, but to get an original Casiotron, it’s important to search for a reputable vintage watch reseller.