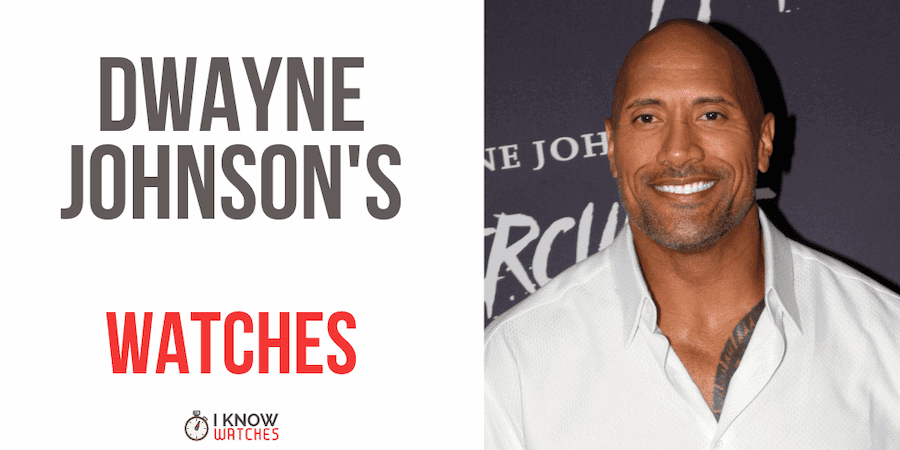 Tinsel Town’s Dwayne “The Rock” Johnson has a watch collection as impressive as the feats he performs to save the world in his action-packed movies. And as one of the world’s top 10 highest-paid celebrities, he can afford the best luxury timepieces.

Fashion critics had input from The Rock himself in an interview in which he described his preference for “tool” watches. These watches are designed for high octane situations from underwater to the cockpit of a plane. These chunky monsters have oversized dials, military functionality, and indestructible construction. They can be spotted on Dwayne’s muscular arm in movies from the “Fast & Furious” series to box office hits such as “Skyscraper” and “San Andreas.”

Quotes from Dwayne Johnson’s interview on watches show his preference for robust Swiss luxury brands from Paneri, IWC, and Breitling.

” What I most look for in a watch is how it’s made, what goes into it, and of course the design.”

Panerai, a brand that combines fine Italian style with famous Swiss watchmaking steals a few scenes in “Fast & Furious 5.” Dwayne also has a few of his own.

The Luminor Submersible Chrono Pam187 appears on Dwayne’s arm in high-speed car chases and other dangerous stunts. While most of the action is on the land, this Panerai model can withstand water pressure at a depth of up to 1,000 meters. As strong as The Rock himself, the massive 47 mm case and bezel are made of 316L brushed steel. The black analog dial features luminous hour markers and an Arabic numeral at 12 o’clock, three chronograph subdials, and a date display between 4 and 5 o’clock. The bezel rotates anti-clockwise. It’s powered by an automatic mechanical Panerai OP XII caliber and 27 jewels.

“I prefer materials that will stand the test of time and my lifestyle of course.”

The character Dwayne portrays in the disaster-action movie “San Andreas” has to survive earthquakes, avalanches, and harrowing helicopter rides. Made of indestructible titanium, the Panerai Luminor Submersible 1950 3 Days Automatic Titanio with its 72-hour power reserve fits the role perfectly. The 47 mm case is made of brushed titanium and the anti-clockwise bezel is brushed titanium with polished edges. It’s powered by the brand’s automatic P.9000 caliber movement and 28 jewels. The black dial has luminous Arabic numerals, the date at 3 o’clock, and seconds at 9 o’clock. It’s water-resistant to 300 meters.

“Whereas you change your clothes to suit the weather, or what you’re doing or where you’re going, I like a watch that I can wear for any occasion.”

When he isn’t fighting the forces of evil on the set, Dwayne’s Panerai go-to watches are the Luminor Acciaio and the Luminor Marina. The Acciaio PAM000090 has a simple dial despite featuring complications like a calendar and power reserve indicator. The 44 mm 316L stainless steel case has a polished steel crown protector. The black dial has luminous hour markers with Arabic numbers at 6 and 12 o’clock and a power reserve indicator at 5 o’clock. The automatic, self-winding timepiece is powered by Panerai OP IX caliber movement.

Dwayne’s Luminor Marina PAM1312 is one of the brand’s most iconic models. It’s a direct descendent of the one Sylvester Stallone wore in the movie “Rambo” in 2008.

Both of these Dwayne Johnson watches have classic black alligator straps.

“When I go to a movie premiere, I’m not thinking, ‘what kind of watch goes with this shirt or this jacket’?”

Dwayne is often seen sporting a spiffy yet practical IWC Big Pilot Heritage IW501004. The 46mm case is strong titanium and it features a black dial with Arabic numerals, the date at 6 o’clock, and a seconds subdial at 3 o’clock. The hands are accented with steel blue and the crystal is sapphire with an anti-reflective coating. Powered by automatic self-winding IWC 52110 caliber movement, this timepiece has a power reserve of up to 168 hours. It has 6 bar water resistance and a brown calfskin strap.

“For me, a watch is a tool. A good-looking tool, granted, but definitely not a piece of jewelry.”

The Breitling Transocean Chronograph Unitime is one of the most handsome and complicated watches in the Dwayne Johnson collection. The dial comes in black or white with a globe design in the center. Dwayne’s is white with a rose gold case and a brown leather strap. The outer rim lists 24 major cities from 24 different time zones. The 24-hour disk allows the wearer to read the time anywhere simultaneously with local time. It also features a daylight savings time indicator, chronograph subdials, and a date window between 4 and 5 o’clock.