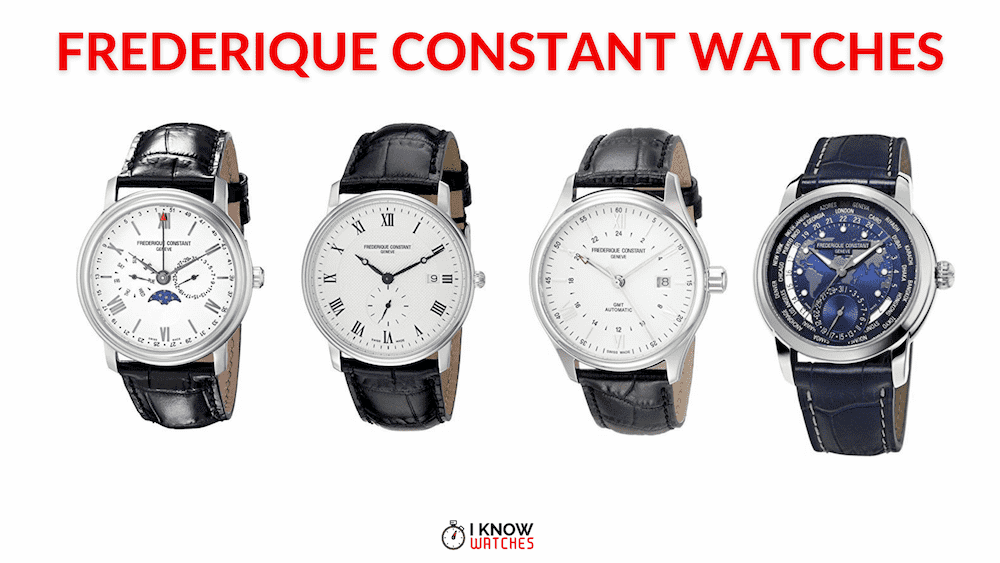 Frederique Constant are a relatively new brand in terms of Swiss watch heritage. In fact, the company only came into being in 1988.

It was actually founded by a husband and wife team, Aletta and Peter Stas, with the name of the company derived from their middle names – which are the names of the great-grandparents, one of which was a maker of dials back as far as 1904. So, there is certainly watch making in their blood.

The set out to bring more affordable options to the luxury Swiss watch market, the likes of which were often seen in Asia with Seiko and Citizen.

However, as we all know, most Swiss brands like to keep prices high, keep a closed supply with their movements (ETA) and are not very open to newcomers.

They succeeded to such a degree that they not only expanded and bought other brands themselves, like Alpina, they have since been bought out by Citizen to help them expand even more.

So, if you would like to own a classicly styled Swiss made watch, but don’t want to empty your pockets to afford one – then this might be the choice for you. Frederique Constant produce watches in the mid-thousand price range, all the way up to ridiculous, but there are a lot of affordable options out there.

Many of which are quartz, which is why they are more affordable, but there are a few Automatic movements too. Which they usually make themselves these days.

In this post I want to take a look at some of their more popular options, both Quartz and Automatic, so show you what is available and how high a quality you can get for a reasonable price. 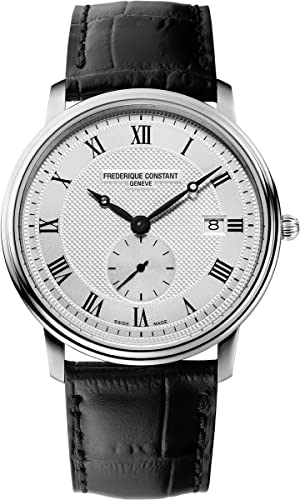 One of the hallmarks of the Frederique Constant brand is their classic designs, and not surprisingly their “Classics” range personifies this. This particular model, complete with automatic self-winding movement is something anyone looking for an old-school dress watch will love.

The Roman numeral indicies, along with the fine Clous de Paris guilloche on the inner portion of the dial. The hands are simple, polished black affairs with decorative circles towards the tips. And the small seconds sub-dial at 6 o’clock, along with the subtle date window at 3 o’clock finishes off the style.

Of course, there are the markings of the brand at 12 o’clock and Swiss Made proudly stamped at 6, because after all, this is a brand that prides itself on being made in Switzerland. 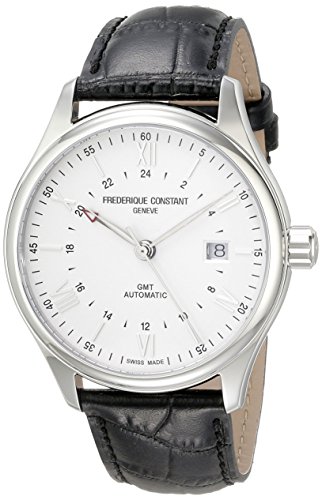 If you are a frequent traveler to different time zones, then this particular model of the Classics series will win you over. Not only do you get the clean, classic style that is part of this collection from Frederique Constant, you also get an additional time zone – hence the GMT on the dial.

There are actually three levels of time keeping on this watch, with the more subtly colored Roman indicies, with the minute train around the outside. On the inner part of the dial is second time zone, which can be set with the crown to a often visited (or maybe called) time in the world. As is typical of such second timezones, the hand has a different colored tip, in this case a slightly darker red.

It may be a little too busy on the dial for many of you, but those who need that second timezone will appreciate this watch. And you lose nothing else, with the same classic style and automatic movement inside. Just be aware, that this watch is a little larger than the previous model – at 43mm, it might not suit a smaller wrist. 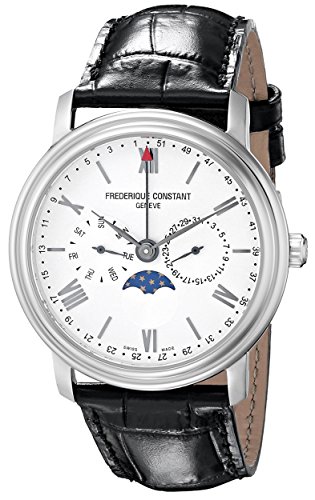 Slowly upping the ante in terms of complications and complexity, this model has a few more interesting features. Instead of the GMT dial we saw in the last model, this one has a moonphase at 6 o’clock, which the budding angler in you might appreciate.

On either side of that, is a combination of sub-dials to represent the day and date, instead of the traditional windows many watchmakers usually stick at 6 o’clock. This one has a little more class if you ask me. Although, reading it is not as quick and easy. Especially since the 31 and 1 are so close together.

The rest of the dial is very much like the first Classics model we saw above, only there is a little compromise on the movement (and lower price) because this model is a Quartz. However, it does mean a thinner watch at 10mm, which is great for slipping under the shirt sleeve. 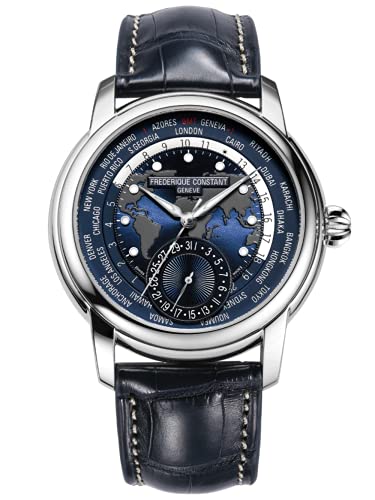 Frederique Constant are all about restraint and tradition when it comes to watch styles, but this model breaks all the moulds.

For many, the dial might be too busy, but everything has a purpose. The sunray globe dial with the main cities of the world around the dial are there to help the world traveler always know the time, almost anywhere in the world. You simply set your home time at the top (12 o’clock) and you will always know what time of day/night it is elsewhere.

It also has a hand, and stylishly guilloched sub-dial at 6 o’clock with the date, so that almost no timekeeping detail is missed on this watch. And, the final touch on this masterpiece is the display caseback, also in sapphire glass.

Many people love the stunning blue of the dial and match leather band, however, there is also a few other colors available if your taste varies. Just click on the images further down to see more details on those models 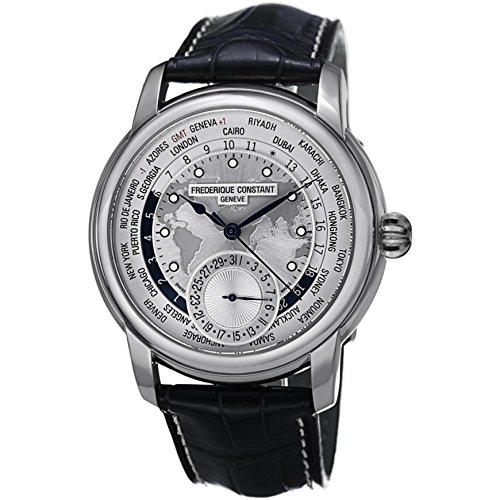 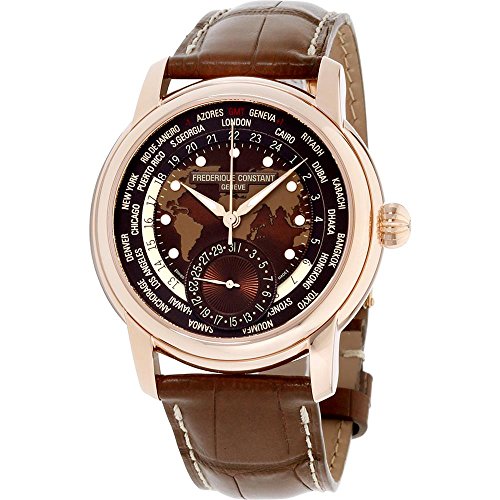 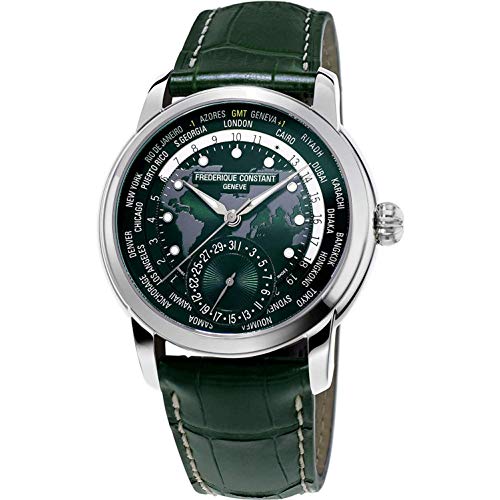 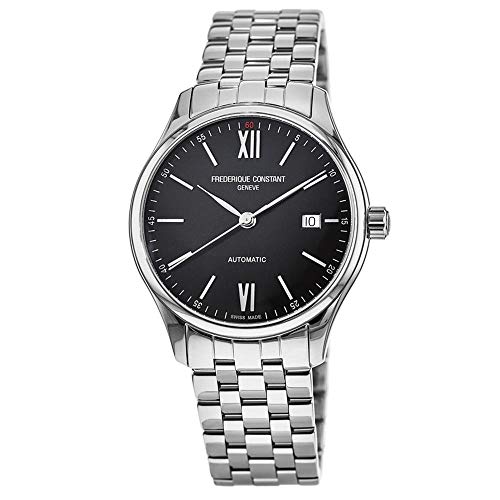 Moving back to simplicity in dress watches, this all stainless steel model will appeal to those of you who don’t want a leather strap. The black dial, with the applied Roman numerals and diamond cut hands contrast well and make for simple time keeping.

The jubilee bracelet is also a touch of class to this timeless watch, and the Automatic movement inside the jewel in the crown so to speak. Not much more to be said about this watch. 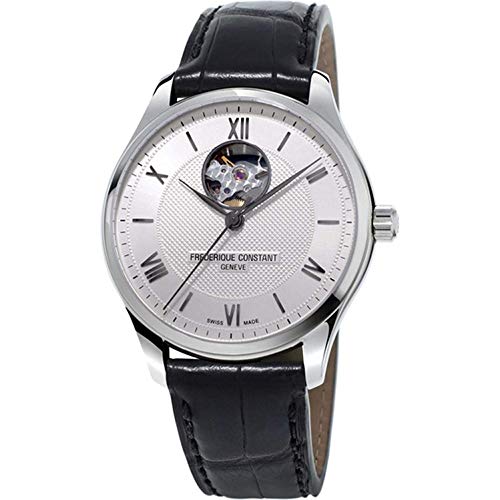 Another noteworthy design I wanted to mention is the open heart design from Frederique Constant. For those of you who have never seen one, it is a rather unusual affair. Part of the internal mechanism is exposed in a “sub-dial” sized hole.

The rest of the watch is similar to many of their classic models above, but this one has a special place in my…heart!