The Seeker GMT is part of Orient’s upscale Star line of watches, which is made in Japan. It is often dubbed as one of the best GMT watches ever made, thanks to its ability to tell the time in three different time zones simultaneously.

Is it really the best? Let’s find out. 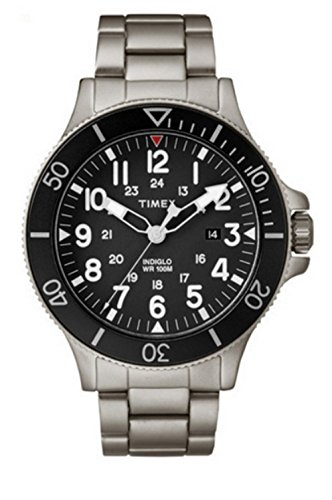 I will focus on the Seeker GMT watch with the black dial in this review. To be perfectly precise, that’s the SDJ00001B model. You can also get a version of this watch that has a white/silver dial – that’s the only difference between the two. All of the following features remain exactly the same:

This is a GMT (Greenwich Mean Time) watch, which indicates that it has can keep time in multiple time zones. The Seeker GMT, in particular, has two hour rings, in addition to the 12-hour markers on the dial, which allows you to tell the time in three time zones.

So, if you have friends or family that live far away, this will actually be a very useful feature. And if you just think GMT watches are really cool, I’m completely on your side! Let’s talk about all its other features so that you can convince your friends you didn’t buy it just because it looks really cool!

How Does The GMT Function Work?

The hands keep the current time as always, however when you move them around the dial by 12 hours, the red GMT hand moves by 1/2hr on the inner ring, and 1hr on the outer ring. So, you can position the red GMT hand on one time zone, and then move the outer bezel to align with it on a second time zone. The hands are all moved on the second click of the top crown, the bezel is unlocked by the lower crown.

The dial of the Seeker GMT is fairly busy. There are four different rings with markings, a power reserve indicator, a date window at 3 o’clock, Orient’s branding, and a total of 5 hands-on dial. With so many things going on, it takes some time to get used to the dial.

One thing that helps is that all the markings and hands are white (apart from the GMT hand), against the black background of the dial. The contrast helps the markings stand out, and makes the watch easily legible, despite the dial being so busy.

About all the rings – they are the reason why this watch is considered one of the best GMT watches ever made. All the rings allow you to tell the time in three different time zones.

The innermost ring (with Orient logo), features 24-hour time markings. It has even numbers up until number 18, and then 21 and 23. This is because the power reserve indicator blocks the 20 marking – I think it’s a smart way to preserve the continuity of the markings.

The innermost GMT ring is encircled by a ring of 12-hour time markings. They are all rectangular and fairly thick, with the 12 o’clock marking being twice as thick as all the others. These markings are raised, and when you tilt the watch you really get that 3D effect.

The next ring features dots filled with lume as hour markers and hash marks for the minute markers. There is a dot above each time marker of the 12-hour ring.

The last, and perhaps the most important, is the outer beveled ring. It features 24-hour time markings, with even numbers and dots that represent odd numbers. You can rotate this ring, with the lower screw-down crown.

And there’s more – I’ve barely mentioned the hands. The hour and minute hands are silver and filled with lume, with a semi-skeleton design. This is presumably to allow you to see the power reserve, as the hands make their way around the dial. The seconds hand is a simple, thin baton with a sweeping movement.

The GMT hand is the star of this dial. It is red, and features and a pointy arrow tip, which is filled with lume. You adjust this hand with the upper crown – push it down in the date-changing position, and turn it counter-clockwise. That will only move the GMT hand. There is a slight issue with adjusting the hand – it sort of clicks into the GMT hour markings.

So, you can basically just set it to a particular hour, and not a precise time. But, that’s why you can rotate the outermost ring.

Both the case and the bracelet of this Orient watch are made from stainless steel. The case has both brushed and polished finishes, but the matte look dominates the overall appearance of the watch. Only the ring around the crystal glass is actually polished.

Scratch-resistant sapphire crystal glass, to be perfectly precise, with an anti-reflective coating. When you have this watch under good lighting, it’s as if the glass isn’t even there – that’s how easily legible it is.

The case features two crowns, at 2 and 4 o’clock positions. Neither is stamped, which I know will be disappointing for some of you to hear. There is a crown protector between them, which helps conceal the fact that they poke out, and just gives the watch a more elegant look. But it also makes the case wider, by 2.5mm to be exact.

The lower crown screws down, and the upper is a push/pull crown. The upper crown is used to wind the watch, adjust the time and minute hands, the GMT hands, and the date. And the bottom crown is used to rotate the outer GMT ring. Both crowns are polished, with a high-shine finish.

Seeker GMT has a 41.5mm case (not including the crown protector), which is about 14mm thick. That is a pretty big case – if you have small or narrow wrists, this watch will be too big for you. Especially considering that the lug-to-lug distance is some 50mm.

The bracelet is entirely made from brushed stainless steel, including the double push-button deployment clasp. It is 21 mm wide, with three rows of links. Orient Star logo is embedded in the clasp, and it looks very elegant.

Another thing worth mentioning about this watch is the exhibition case back. The movement is slightly decorated, and the rotor is signed and stylized. There are several inscriptions around the glass that indicate the materials, water resistance of the watch, as well as the fact that it was made in Japan. As is every watch from the Orient Star upscale line.

Seeker GMT supports hacking, and both automatic winding and hand winding. If you can’t be bothered to wind it manually, Orient suggests that you should wear it for at least 8 hours at a time, in order to get the best accuracy. And as long you are wearing the watch, it will keep ticking.

The watch can also be wound manually with the upper crown at the 2 o’clock position. And it is actually fairly interesting to observe how smoothly the power reserve hand moves while you are winding it.

It has a 40-hour power reserve, as I mentioned earlier. When you haven’t worn or wound the watch for 40 hours, the movement stops in order to preserve the parts inside and stop them from wearing out.

Another characteristic of the mechanical watch is the sweeping movement of the second hand. There’s absolutely no doubt about it – the baton hand sweeps smoothly over the dial of the watch. And you can see it in action in the video below.

Orient Star Seeker GMT is water-resistant up to 100 meters. The upper crown doesn’t screw down, which is one reason for the average water resistance.

But this is not even a diving watch, so 100 meters is actually pretty good. The lume is also of very good quality, and lasts quite long, as you would expect from any Orient watch. So, even though it’s not meant as a diving watch, there’s nothing to suggest that you can’t use it as one if you really need to. Just don’t operate the crown underwater and the watch will be fine.

There’s no doubt in my mind that this is an amazing watch. But is it really worth the 4-digit retail price?

The good news is I don’t have to even answer that question – with so many different offers out there, you can easily get this awesome watch for about half its retail price.

The flat sapphire crystal glass is barely visible, the lume is high quality, and the GMT markings are seamlessly incorporated into the design. The matte bracelet looks sophisticated, and the exhibition case back is mesmerizing to observe.

And it is not just about the appearance of the watch. It is about the smooth mechanical movement, the sweeping second hand, and the fact that you can set the watch to three different time zones simultaneously.

My only issue with the Seeker GMT is the size – with a 44m wide case (including the crown protector) it is fairly large. As such, it is not really a good fit for people with smaller wrists. For others, it will probably be the new everyday staple.