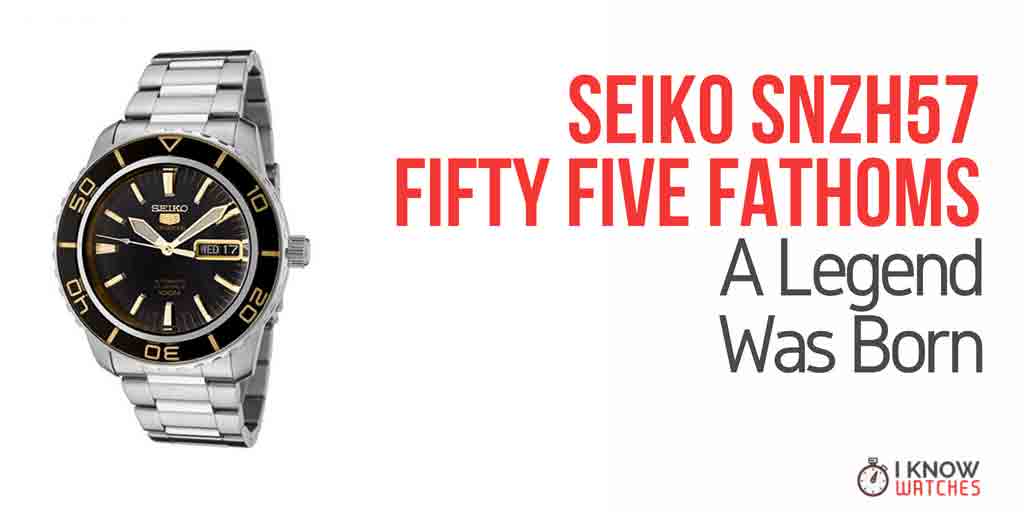 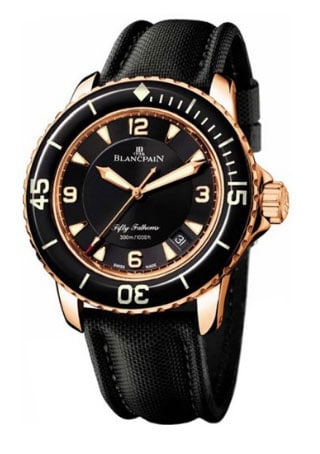 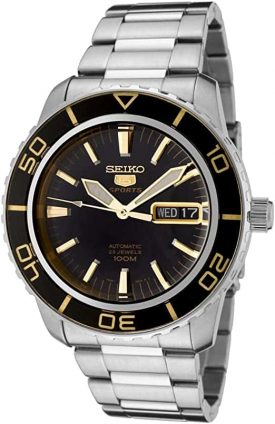 Seiko always manages to create watches that become more than the sum of their parts. And the SNZH57 is one of those models.

It is in many ways a very fitting tribute to the original Fifty Fathoms from Blanc Pain that was designed for the French Combat Diving School’s commanders Maloubier and Riffaud.

That was back in the 60s, and this is today when the Fifty Fathoms is a very much sought after, and extremely expensive watch.

The Seiko 5 SNZH57, without modification (more on that at the end), can retail for a few hundred bucks.

The actual after market Fifty Five Fathoms (Five more to avoid copyright issues) is usually a modification of this model or another SNZH Sea Urchin. 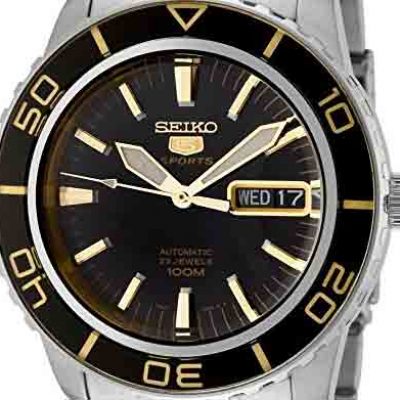 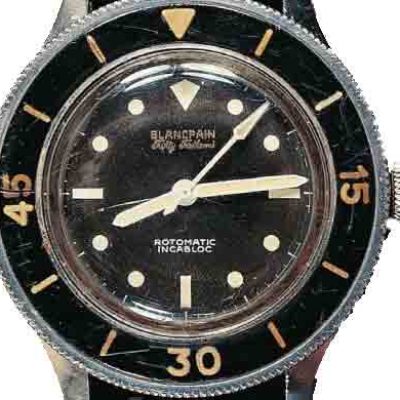 Despite being inspired by the Fifty Fathoms, the Seiko is actually different in quite a few ways.

If you know Seiko Dive watches like the SKX range and the Sea Urchin, Seiko normally produces very similar styles in dive watches. However, there are some striking differences that make this watch far more like the Blanc Pain.

The hour markers are raised rectangular bars, with the 3, 6, 9 and 12 being a little more rhomboid. This is not at all like the original.

The minute markers are intertwined between the hours, which is not the case on most other Seiko dive watches but follows the Fifty Fathoms a little more than a Seiko.

There is also no lume, which defeats the purpose of the watch in a way, as it should be legible in the dark, when you are diving at 100m!

The hands are a little similar to the original Fifty Fathoms, being lumed with a nice gold edge on them, but more sword-shaped than the simple long hands on the BlancPain.. The second hand is also quite similar, with the head missing the red touch and the tail being a little more weighty

The original had a no date window, whereas the Seiko has both a day and date. The modern version has a more subtle date window between 4 and 5 o’clock.

The bezel is again quite simple, like the Blanc Pain’s, but the numbers is more modern and square and the minute markers, usually found nearer to the zero point on a dive bezel, are missing on both. This was something that become a trend more after the  Rolex Submariner became the icon that it is.

Seiko have used their workhorse automatic 7S36 in this watch, which although not remarkable, is super reliable and a great buy at such a price.

It is unfortunately non-hacking and not self-windable, but given the cost of this watch, we can hardly complain, right?

As far as dive watches go, 100m (330 ft) is not very impressive, and actually does not satisfy ISO standards for true Dive Watches. However, given that the original was meant to be used down to Fifty Fathoms, which is just under 100m, this is very fitting actually.

Although, 100m is actually the kind of depth you can reliably take a watch into the water with and go swimming, snorkelling, and maybe very shallow diving. Seiko have not included a screw-down crown which would help ensure the water resistance, so I would not take this baby diving. 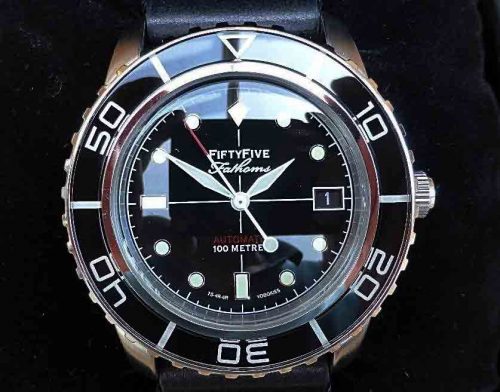 To round off this review, I thought it would be worthwhile to talk about the Seiko Fifty Five Fathoms you can get right now. (Unless you like the Steeldive homages, which are also worth checking out).

They are not easy to come by because you have to either buy the mods yourself (bezel, face & hands normally) and fit them, or grab one from a reputable dealer or online retailer.

There are a few available on Ebay in a variety of forms (given there is no actual rules on how it should look, and BlancPain have so many models now anyway).

The image I have here is from a current auction, so honestly there is no way of knowing if you can buy exactly this one when you are reading this review. But similar ones should be available, especially if you are patient.

If you are ok with just the SNZH57, which is a great looking watch if you ask me, then it’s a pretty simple buy even on Amazon.