Seiko Tuna vs Baby Tuna: Is The Price Difference Worth It? 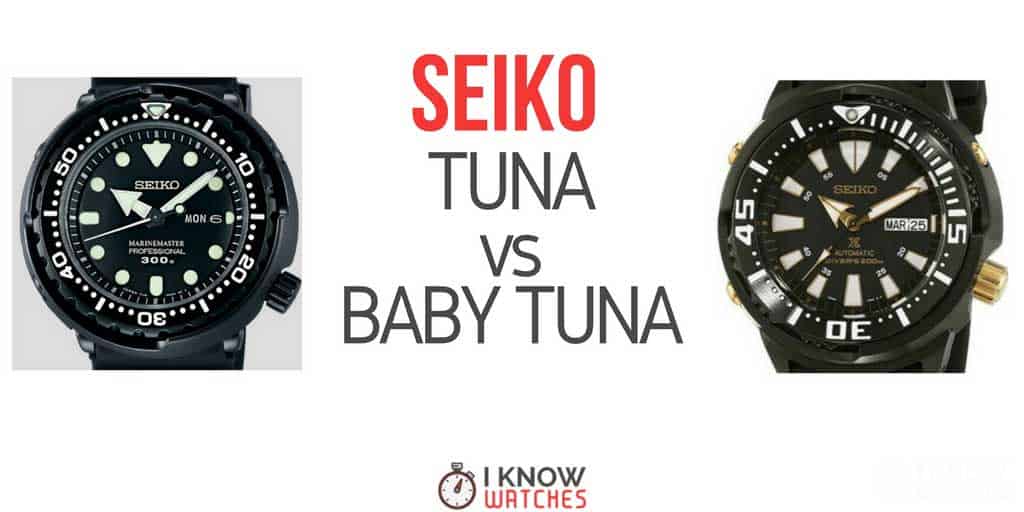 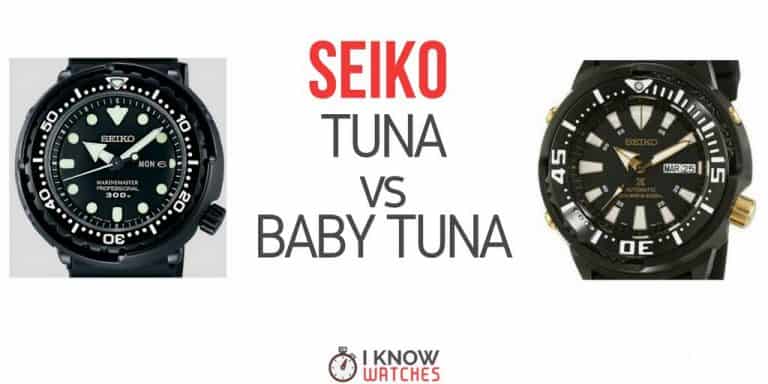 Tuna vs Baby Tuna: Which Watch Is Better?

The Seiko Tuna has become a classic in the dive watch world since it’s creation back in 1975.

This is a hefty tool of a watch that is meant to be used by serious divers down to serious depths. In fact, so much so that the Tunas range from a measly 200m down to 1000m, if you happen to wear it while repairing an oil rig out on the gulf!

There are way too many Tuna models to seriously compare with the Baby Tuna in this review, so I have chosen the one that looks visually most like the Baby. I have seen the new SBBBN035 referred to as the ninja because it is all black, and it is indeed a seriously dark looking watch.

But, when you get down to the details of both of these watches you will be impressed with the level of detail, quality and amount of Seiko goodness you get for prices that go down as low as a couple of hundred bucks for a Baby Tuna.

Whether it is worth it to fork out the near 1 grand you will need for a Tuna instead is up to you.

After the review, you will be able to decide… 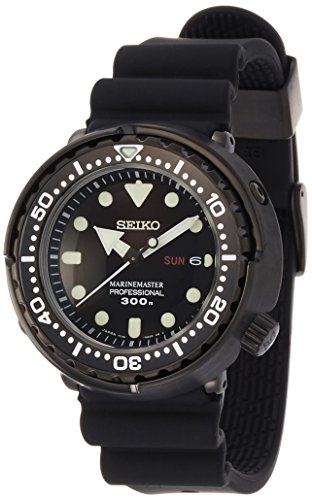 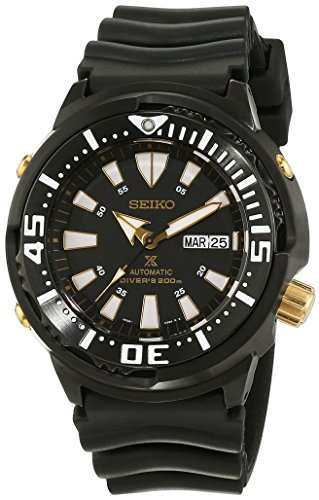 The Differences Between The Tuna and Baby Tuna

Let’s start with the face, because that is where the biggest differences are.

Both these watches come in the distinctive “tuna” can case that this series of watches is known for, but, in many ways, they look completely different.

Starting with the bezel, you can see that the markings are significantly different. The Tuna is more elegant, with lines every 5 minutes and simple dots in between. The 10 minute markers in arabic numerals are then clearly shown, but not too large, except at 0, where both watches have an arrow/triangle of some variety.  The Tuna’s top market is larger and better lumed.

Moving to the face, you can see that the minute marker rail on the Tuna is again more refined, white and clearer to read. Something that is critical for a dive watch tool like this one. And although the 10 minute markets in lume are not as large as the Baby Tuna, they more likely glow longer.

Overall, the Tuna’s face is more refined due to the subtle white markets and lume markers, as well as the black background on the day/date. The Baby Tuna is still quite impressive, but is more gaudy in my eyes, with – big numbers on the bezel, big bezel markers and minute lume markers inside. Not to mention the use of gold, which somehow looks a little tacky to me.

Another area both these watches differ significantly is the movement. Although, take that with a grain of salt as the Tuna comes with some many variations, you can almost pick the movement you want (automatic, solar, quartz).

But, we  are comparing these two watches, right?

The Tuna in it’s more modern form is renowned as being a very reliable dive watch tool. As such, having a Quartz movement is a real boon. It is more reliable, easy to maintain and thinner as a result. They use the 7C46, built in-house by Seiko specifically for the Tunas. And, if the experience of the guys at Worn & Wound is anything to go by, this is a super-reliable and long lasting (battery life) movement.

The Baby Tuna has an automatic movement (the 4R36), which is actually quite surprising for a watch that is in the five hundred price range. And, it’s not anything to sneeze at either. It features 24 jewels, day date, hand-winding and hacking. Something you would pay a lot more money for if this was a Swiss watch.
So, if you want a decent priced automatic dive watch that is distinctive looking like the Tunas, then this is a great buy. But you will get more accuracy and a lighter, thinner watch with the Tuna Quartz for sure.

Another “small” difference is the water resistance, with the Baby only coming in at a respectable 200m. The Tuna has a far bigger range. The SBBN0035 has 300m, while many of the other Tunas can go way way deeper.
SEE THE TUNAS ON AMAZON >
SEE BABY TUNA ON AMAZON >

In the end, both these watches owe their distinctive look and case to the Tuna family created by Seiko back in 1975.

So, although there are significant differences in the face, bezel and movement of the watches, the do look quite similar on the arm.

The case is just super-unique. Plain and simple. And the creation of this watch as a dive tool is clear.

And The Winner Is?

For me, the clear winner is the Tuna.

It looks far more stylish and read for action (diving that is). The face and bezel are far easier to read, the variety of styles and materials (steel, titanium, ceramic, as well as bands) mean you can have almost any you want. And, you are buying in to a tradition that dates back to 1975.

Sure, the Baby Tuna is way cheaper. But it lacks the finesse and good looks of the original, and has far less choice in certain areas.

In the end, which one you buy is a matter of taste and price. 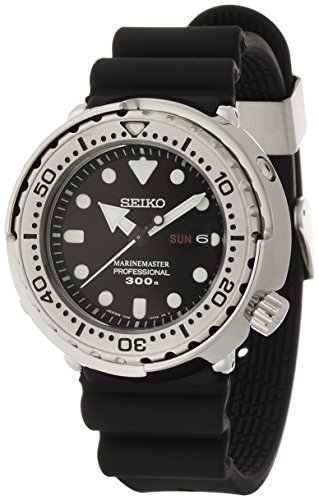 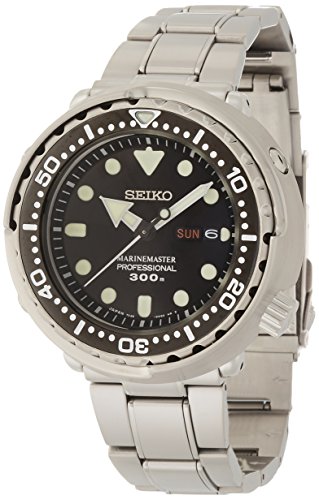 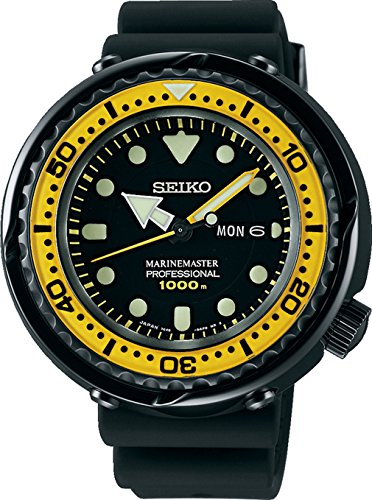 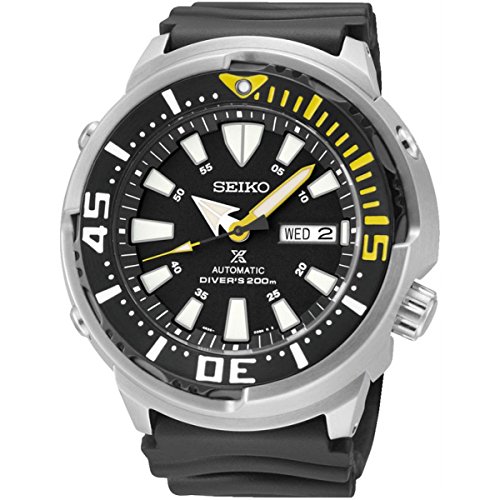 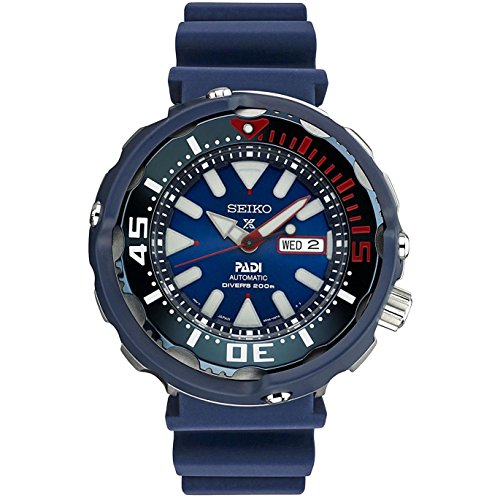 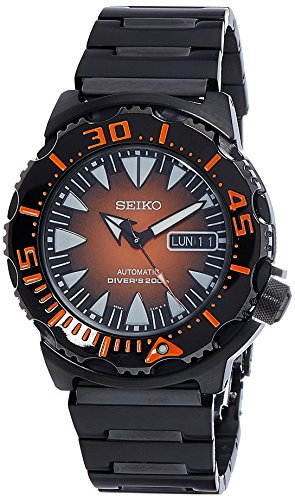