Casio G-Shock Rangeman Vs. Mudman: Which Is Better? 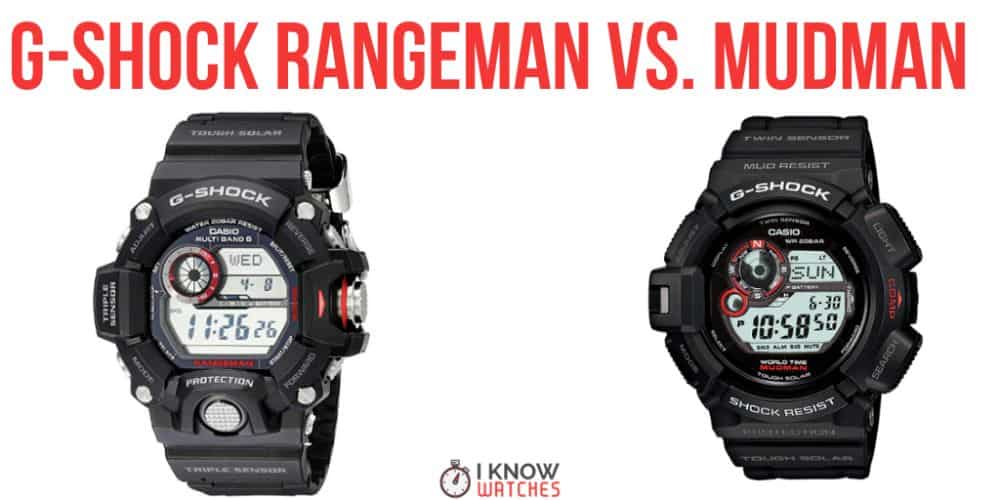 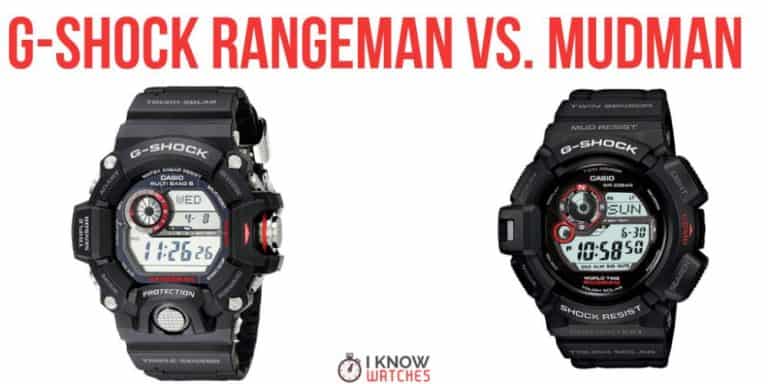 Casio G-Shock Rangeman Vs. Mudman: Which Is Better?

Can’t decide between the G-Shock Rangeman and the Mudman? Welcome to the club. Both of these Casio watches are solar powered, have tons of different sensors and are shock resistant. But there are also lots of differences between the two.

Since there’s quite a few models of both these watches, I need to be precise about which ones I will be talking about.

In this post, I will compare the two most popular models of the Rangeman and the Mudman watches – the GW9400 Rangeman and the G9300 Mudman. If you were eyeing one of these two, then you are definitely in the right place!

The Displays - Rangeman Vs. Mudman

At first glance, the displays of these two watches are pretty much the same. They consist of roughly three parts – the day area, the time area and the compass. But the devil is in the details – as always.

So, let’s begin with the Mudman. The round face of this watch is covered with mineral crystal glass, which has very good impact and scratch resistance. The display of this watch features three areas – in the top left corner there’s a digital compass, which measures and displays direction as one of the 16 points on the compass.

To the right of the compass, there’s the day section. This indicates what day of the week it is, and not much else – at least in the out of the box setup.

The largest section of the display is the third one, the time-telling one. As you would expect. Naturally, here’s where you can actually see what time it is – but with so many features on both of these, does anybody really care about the time? Anyway, in addition to the time, you can also see the date here, as well as a battery indicator in the top left corner.

The indicator is rather simple – there are three letters – H, M and L. These indicate the level of charge in the battery – High, Medium, Low.

The face of this watch is round, with the model indicator in red letters below its largest area. And with reminders of what other features you have on this watch all around the display.

What about the Rangeman? This one is much more appealing, at least to me. Here’s the interesting part – at first glance, this display appears to be much busier. But when you take a closer look, you can clearly see that it’s not. In fact, this is the sleeker and more polished display out of the, as far as I am concerned.

The reason it appears busier is because it is actually smaller. It is not completely round, because they had to make space for all the buttons you have on this watch. So they compromised on the display size.

The Rangeman’s display is also divided into three parts, with a digital compass in the top left corner. To the right of the compass, there’s the day/date section. Here you can see the date, the day and the battery indicator. One thing that is obviously different is that the battery indicator is not entirely digital. The HML letters are not on the display, but rather on the separator.

The time-telling area is the entire bottom half of the display. The digits fill up almost the entire area, and so they are very easy to spot at glance. Which is exactly why I prefer the look of the Rangeman.

Keep in mind that this is just the basic setup of the watch. With so many different features and sensors on both of these, the appearance of the display will change a lot as you learn how to use it.

The Case - Rangeman Vs. Mudman

That’s also the reason why the Rangeman weighs so much more than the Mudman. The heavier G-Shock watch weighs in at 93 grams, while the lighter G9300 weighs only 68.5 grams. So, do you want a watch that’s lightweight on your arm, or do you like something with a clear presence?

The stainless steel cover of the buttons on the Rangeman also makes them more durable, and more visually appealing. It gives them a certain wow factor, and makes the watch appear more rugged. Don’t you think? It must be the texture of the steel.

There are lots of buttons on both the watches, but you won’t have any issues telling them apart. There is a label that lets you know what each button does, so that you don’t go to turn on the backlight and wind up changing the time zone.

But there’s something also about the cases of these watches, and it’s not that obvious until you take a really good look. The case of the Mudman is much more round, without too many sharp lines. In fact, even the buttons on the side of the case are rounded. And so the entire watch appears a bit softer. More approachable.

Which cannot be said for the Rangeman. The case of this watch has plenty of sharp edges, straight lines and topographic differences. All of which makes this G-Shock appear more rugged; almost fearless.

So, what do you want your watch to say about you – approachable or fearless?

The Bands - Rangeman Vs. Mudman

The bands on both watches are made from the same material – resin. And they feature pin holes throughout the entire band, so there won’t be any issues in terms of adjusting the band to fit your wrist well. But they’re not exactly the same.

The difference is mostly visual – there’s not really a huge advantage to one type of buckle or the other. Just the matter of which you think looks best.

Both of the watches have great water resistance – up to 200 meters. This makes them perfectly suitable for diving, swimming,and other water related activates such as fishing, paddling or kayaking.

They both have backlight as well – another important feature for diving, since it can be a bit difficult to read your watch underwater. But there are certain differences in the type of backlight.

The Mudman features electro-luminescent backlight, which is blue-green in color. It has a full auto light switch, an afterglow and the duration of illumination is adjustable. You can turn on the light by pressing the button on the top right – you will easily spot is since it is labelled “light”. The backlight of the Mudman performs just as well as you would expect it, but it’s nothing spectacular.

What about the Rangeman? The main difference between this watch and the Mudman is the type of backlight. The Rangeman has an LED backlight, which shines white. I prefer this to the electro-luminescent backlight, since it is brighter. In addition to that, the other backlight features are pretty similar – you turn it on with a push of the button, but this time it’s the big round one below the display. You also have the option to select the duration of the light, you can turn on the afterglow and you can switch it to full auto mode.

The two Casio watches actually share quite a lot of features:

Another feature both the Rangeman and the Mudman have in common is the thermometer. It is capable of recording temperature between –10 to 60°C (14 to 140°F), and it allows you to choose whether you want the temperature displayed in Celsius or Fahrenheit.

Both of these watches are also pretty popular for being able to tell time in different time zones. And this feature is the same on both of them – they can display the time of 31 time zones (48 cities), along with the city code, and information about daylight savings time.

But, if you want the bells and the whistles, then the choice is pretty obvious – go for the G-Shock Rangeman GW9400. And it’s all because those two little words plastered all over the watch – TRIPLE SENSOR.

This Rangeman watch is capable of so much more than the Mudman. Some of its unique features include barometric pressure measurement, altitude measurement and the ability of being controlled by radio waves.

Let’s talk about these a bit – the Altimeter has a measuring range of 700 to 10,000 m (–2,300 to 32,800 ft.). It can have up to 40 measuring records at a time, all of which would contain the date, the time the altitude, the barometric pressure, the direction angle and the temperature. Basically, all of the readings that this watch is cable of merged into one simple record.

The barometer of the Rangeman has a display range of 260 to 1,100 hPa (7.65 to 32.45 inHg), with an atmospheric pressure differential graphic. And also the ability to inform you about any significant changes in pressure with an information alarm. Very convenient.

There is also one feature that’s unique to the Mudman – the ability to display moon data. The watch is able to tell you the moon age of any specific date, as well as a graph of moon phases. Whether or not this is useful is a very individual thing.

G-Shock Rangeman Vs. Mudman: Which Is Best For You?

Still having a hard time choosing? I’ll try to help.

The Mudman is the better option if you want a reliable and sturdy digital watch. It has plenty of great features (compass, thermometer, backlight etc.), awesome water resistance and it’s a very durable solar powered watch. The band is tough and easy to adjust and the watch has a really good price point.

But if you want features that you didn’t even know you needed, then get the Rangeman. It’s an amazing watch – it has (almost) all the features of the Mudman (minus the moon phase graph) and then several unique features, like the altimeter and the barometer. Something that will really come in handy if you spend most of your times outdoors. The Rangeman GW9400 is also the more expensive option, but the difference in prices is really not big – about $50 (on Amazon) at the moment.

If both are just too expensive for you, then check out some G Shock alternatives here.