The Wolf of Wall Street Watches 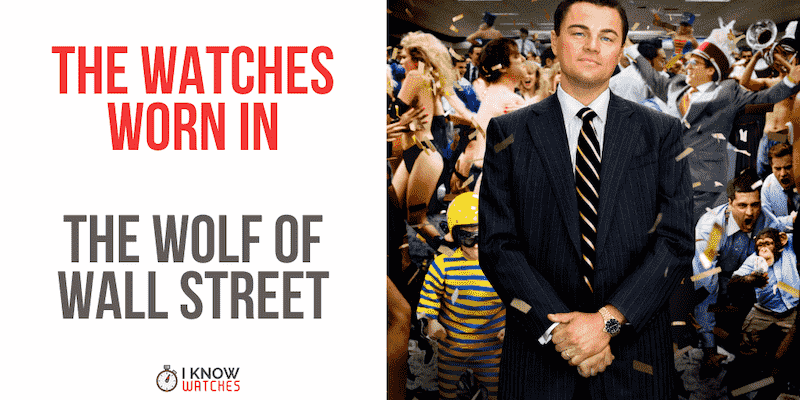 Film director Martin Scorcese’s recent masterpiece “The Wolf of Wall Street” is based on the true story of the rise and fall of stock market investor John Belfort and his cronies. It’s a fascinating movie about white-collared criminals and the not-so-legal lifestyle of New York stock market gurus in the early 1990s. The film features lots of wealth, yachts, substance abuse, and men in expensive suits with luxury watches gleaming on their wrists.

So much wrist candy is flashed around that the film could almost have been titled “The Watches of Wall Street.” It’s not surprising that the characters wear timepieces like Rolex and top-of-the-line Tag Heuer. After all, they’re too rich for Casios, and Director Scorcese is a Rolex Ambassador and lifetime supporter of the brand.

Let’s have a look at the role of the leading characters and the watches worn by the cast in this iconic film.

Which Watch Does Leonardo DiCaprio Wear? 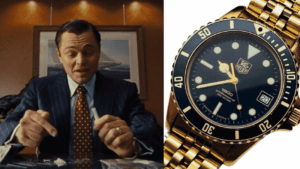 In the Wolf of Wall Street, Leonardo Di Caprio plays Jordan Belfort, the smooth-talking son of two accountants from Bayside, Queens. Working on Wall Street since age 22, he lives a lifestyle fueled by drugs and countless hookers. He admits that he “does enough drugs to sedate the majority of New York’s population.” But money is the drug he loves the most and the one that can help him conquer the world.

As Jordan Belfort snorts a line of cocaine with a $100 bill and then crumples it up and tosses it in the trash basket, you’ll notice a handsome 18k gold Tag Heuer Professional 1000 series watch on his wrist. It closely resembles the classic Rolex GMT Master II reference 16718. And while there are plenty of Rolexes in the film, thanks to the brand’s director-ambassador, this one is actually a custom watch from a line that was discontinued in the early 1990s. DiCaprio himself was a Tag Heuer Ambassador at the time and also wore such a watch in other movies.

If you look closely, you’ll also notice Leonardo Dicaprio, aka Jordon Belfort, wearing another Tag Heuer timepiece, the less-famed yet luxurious Tag Heuer 2000 Exclusive ref. WN5141 in gold plate with a genuine diamond bezel. The Tag Heuer 2000 series was introduced as a line of both chronographs and dive watches.

In the beginning, they were steel or gold-plated. A solid gold version wasn’t available until the early 2000s. Keen-eyed moviegoers will know the difference. Belfort’s gold-plated Tag Heuer is the perfect watch for a con artist.

Which Watch Does Matthew McConaughey Wear? 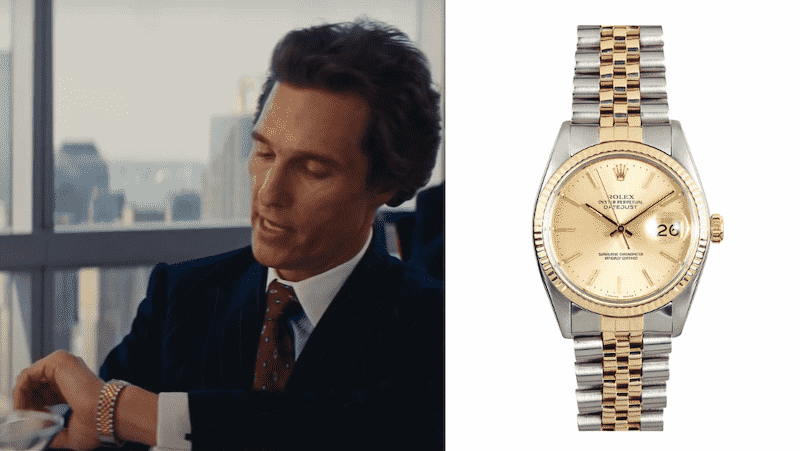 Matthew McConaughey plays Jordon Belfort’s smooth-talking boss Mark Hanna in Wolf of Wall Street. His role is crucial in the development of the main character Belfort. In one of the early scenes, Jordon meets Mark for a martini-fueled lunch where they discuss the ups and downs of the stock market. Mark does a money chant while beating his chest and gets Jordon to join in. Mark declares the market is all “fugazi” and admits he’s pretty much just in it for the hookers and blow.

The classic 1980s Rolex dual-tone Datejust watch spotted on McConaughey’s wrist fits his role as a big-shot Wall Street perfectly. The stainless steel and 18K yellow gold watch dates back to the late 1980s making it realistic for the time setting of the movie. It’s powered by the famous Swiss watchmaker’s Calibre 3135 self-winding mechanical movement, has 31 jewels, and a 48-hour power reserve. The date is displayed at the 3 o’clock position.

Which Watches Does Jonah Hill Wear? 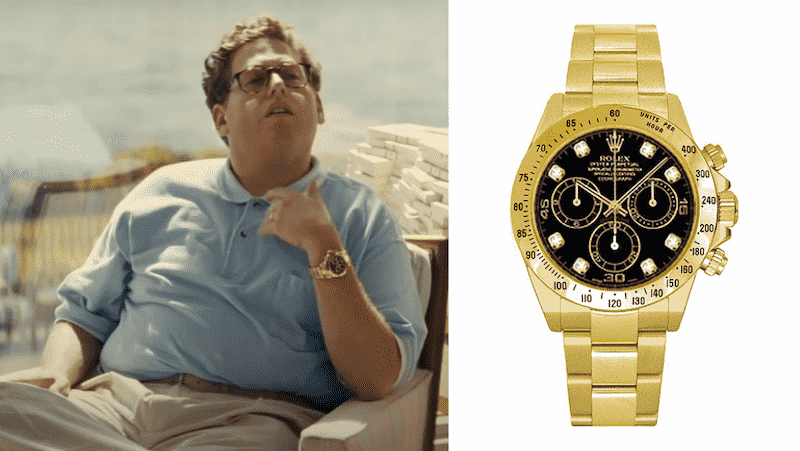 After Jordon begins making some serious money, he’s approached in a diner by chubby, bespeckled Donnie Azoff played by Jonah Hill. After the two strike up a conversation, they learn that they both live in the same apartment building. When Donnie finds out Jordon made $72,000 the previous month (Jordon proves it with a pay stub) he calls his boss from the restaurant and quits his job as a childrens’ furniture salesman.

The two become business partners and set up shop in an abandoned auto garage. They hire a set of questionable characters to join them and from there, they start a larger business called Stratton Oakmont. When word of the company’s success gets around, Forbes Magazine does a hatchet piece on Jordon dubbing him “The Wolf of Wall Street.

Jonah Hill wears the Rolex Cosmograph Daytona 116528 in the movie which helps him portray the flamboyant, over-the-top Wolf of Wall Street’s business partner. The sleek stylish Rolex has just the right bling with its lustrous 18K yellow gold finish and black Paul Newman three-chronograph dial. In fact, the Rolex model Jonah wears is the most expensive watch seen in the film.

The luxury watches seen in this film are more than Tag Heuer and Rolex watches. Many actors in the supporting cast are seen wearing elegant yet simple IWC Pilot watches throughout the movie. The International Watch Company(ICW) was founded in 1868 by Florentine Aristo Jones, a watchmaker from Boston.

He enlisted the help of talented Swiss watchmakers and hydroelectric power from the River Rhine. Upon his return to the United States, the Rauschenbachs from Schaffhausen, Switzerland took over the company. Today. ICW produces some of the world’s finest luxury watches as well as a stunning museum in the region.